I think that we are all aware that we can generally get a better picture as the result of shooting in Raw and then processing for the final image, as compared to a well taken jpg straight from camera. Even if we process the Raw file to mimic the jpg, it will not be worse and the conditions for good jpgs are rare for a wedding photographer.
Since buying a Nikon D810 with its astronomical file-sizes I have had another look at the 12bit v 14bit and compressed v uncompressed discussion.
I won’t bore you with a lot of pictures of a bookcase in my junk room but I will show you the scene so that you can see there is a lot of subtle as well as strong colour and some good shadows and highlights. 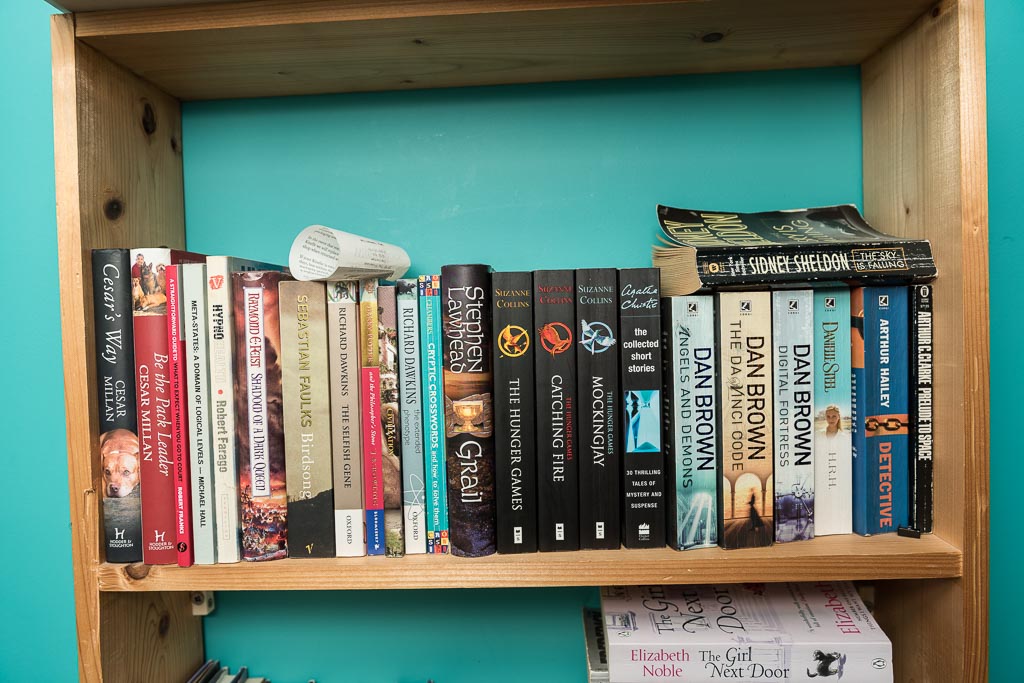 So what effect would we expect from the different options?

As half of the captured data (in theory) is in the brightest stop of information, so pure white to not quite white, it is easy to come up with an algorithm that will compress this mostly flat and detail free part of the picture. This, as I understand it, is precisely what Nikon has done, namely, compress the highlights and leave the midtones and shadows alone. Compressed, what does it do? Well compressed actually strips out some data to make the file even smaller. I found the file shrinkage greater on clean low-ISO files than noisier high ISO files, which is what I would expect.

Uncompressed, is exactly what it says it is and is really only useful to those that have applications that look at specific pixels. For most regular photographers the default option should be lossless compression where the file is compressed and then decompressed to be identical to the original. This is how I have my cameras set.

How did I test the compression options?

The above scene was photographed at different ISOs and also at normal, 2 stop under and 2 stop over. (If my exposures are further off than 2 stops, I’ve made a boo-boo or I’m really eeking the information out of the file).

Next  12 or 14 bit.. I would expect to see differences in colour reproduction in the deep shadows when lifted.

On the 2 stop underexposed shots, if I pushed them to 3 stops, I could just about make out slight colour differences, the 14 bit held a truer rendering of neutrals. On the normally exposed shots, I couldn’t see any difference whatsoever, even when “bending” the files a normal amount for a wedding photographer.

Summary, I would have no qualms setting my camera to lossy compressed and 12 bit for everyday use, it will typically reduce the file size by 25-30% over lossless compressed and 14 bit. If only I could bring myself to do it….. 🙂